J Trop Pediatr. Implementation of a comprehensive program including psycho-social and treatment literacy activities to improve adherence to HIV care and treatment for a pediatric population in Kenya Van Winghem J, Telfer B, Reid T, et al. Pediatrics Nov; 5 :e Lancet Infect Dis. Pediatr Infect Dis J Jun;26 6 J Infect Dis. Bringing together data reported by out of countries and territories in , as well as data collected from these countries and territories in previous years, Global tuberculosis control is the definitive source of information about the national and international response to the worldwide TB epidemic.

The report presents the current Business Coalition landscape and suggests next steps for all stakeholders to build on the global momentum and success with engaging the private sector.

Second, how can we account for these variations? Third, how — if at all- have the nature of the epidemic and the need to respond to it begun to shape and change business, in turn? And finally, what do these developments tell us about the capacity of business to respond to the epidemic? The paper concludes by considering the limitations of such a set of responses.

The detailed report by a member consensus panel of the prestigious Academy of Science of South Africa ASSAf has been given to government and is now available online. At least 20 coalitions exist in sub-Saharan Africa today, with more than 16 having been established in the last five years. The study, completed in October , provides guidance to newly-launched and those soon to be formed coalitions; shares best practices, benefits, achievements; and highlights key challenges facing coalitions.

According to the WEF, the emergence of business coalitions is a recent development in sub-Saharan Africa: most have only been created in the last two to five years. Methods: Detailed human resource, financial, and medical data were collected from 14 large private and parastatal companies in South Africa, Uganda, Kenya, Zambia, and Ethiopia.

Results: Among the large companies, estimated workforce HIV prevalence ranged from 5 percent to 37 percent. The average cost per employee lost to AIDS varied from 0,5 to 5,6 times the average annual compensation of the employee affected.

Uptake of employer-provided testing and treatment services varied widely. AIDS was estimated to increase the average operating costs of small tourism companies in Zambia by less than 1 percent; labor cost increases in other sectors were probably smaller. Conclusions: Although there was wide variation among the firms studied, clear patterns emerged that will permit some prediction of impacts and responses in the future. 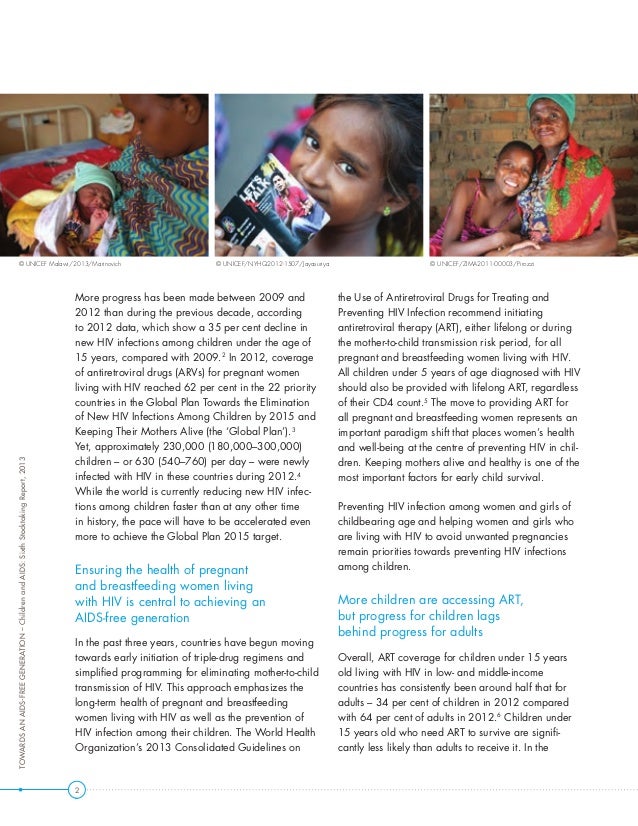 The report also shows that important progress has been made in country AIDS responses, including increases in funding and access to treatment, and decreases in HIV prevalence among young people in some countries over the past five years. The survey took place from 20 July to 6 September and companies participated in the survey. The results from the survey did not differ dramatically from that of the survey. This serves to affirm the findings of the previous surveys and validate the findings of the survey.

Responses also differ significantly between companies of varying sizes and skills levels and between companies from different provinces. Companies based in the Western Cape have experienced a significantly smaller impact compared to companies located in KwaZulu-Natal and Gauteng, two provinces with some of the highest HIV prevalence rates. The publication contains information on the current initiatives taken by municipalities in combating the pandemic.

Strategies to reduce MTCT focus on these periods of exposure and include the use of ARVs, caesarean section before onset of labour or rupture of membranes, and complete avoidance of breastfeeding.

This was a retrospective study at the National Hospital Abuja, a bed referral tertiary hospital located in the Federal Capital Territory of Nigeria. The early infant diagnosis laboratory register of all blood samples submitted over a 2 year period from January to December were reviewed. Patients whose ages were unspecified and whose results were not entered into the register were excluded from this study. Statistical analysis was done using the Pearson's Chi-square test and Fisher's exact test.

Five hundred and fifteen children were included in the analysis while 7 were excluded from the study due to data incompleteness. The mean age group at the time of DBS sample collection was 4 months, with a range of Total of Prevalence of 0. The prevalence of HIV in children who had been breastfed was 9. The prevalence of 3. When neither mother nor baby received ARVs the prevalence was The overall prevalence in this study is lower than 9.

A comparable rate had been reported in South Africa 6. Studies conducted in Anambra and Abuja reported prevalence rates of 3. The rate increased significantly to This is because the lower the maternal viral load achieved with maternal ARV, lowers the rate of transmission to the baby.

UNICEF: Global progress in the fight against HIV/AIDS Pt. 4

The study further revealed an increasing trend in prevalence from birth to 18 months. Prevalence in babies less than 6 weeks was 0. Also breastfed babies had a higher overall prevalence 9. Three 1.

All these implicated breastfeeding as a major means of transmission postpartum. Ideally HIV positive mothers should not breastfeed. Only 12 babies, out of the that had been breastfed were retested at an average time interval between 1 st testing and repeat testing of 4. All 12 babies who had been negetive at the 1 st testing remained negative and all their mothers were on HAART throughout breastfeeding. This being a retrospective study, was not readily feasible to determine the CD4 count and viral loads of the mothers to be able to ascertain whether infection in those babies that were breastfed was due to poor or absent viral suppression.

This demonstrates that advocating exclusive breastfeeding for 6 months in women on HAART in low- to middle-income countries without proper counselling, closely following up the mothers and performing virological testing for suspected cases of failure may pose a threat to achieving succesful reduction in overall MTCT rates.

Other non-chemoprophylactic factors especially breastfeeding and its duration remains a significant risk factor and its continued advocacy remains controversial especially in settings where the mothers cannot be adequately monitored for treatment adherence and adequate viral suppresion. Determination of the effect of these specific interventions is achievable, and requires further prospective cohort studies. Source of Support: Nil. Conflict of Interest: None declared.

National Center for Biotechnology Information , U.