This content was uploaded by our users and we assume good faith they have the permission to share this book.

She takes them to an asteroid which she had made into her home, which is a source of Dark Side energy. This author likes to delve into strange and magical elements that belong better to a fantasy setting. In Rebel Stand , he created a massive Force well under the location of the original Jedi temple on Coruscant. Here, some evil mynocks somehow learned to use the dark side of the force, but died out because of it, but left their imprint in the rocks.

She also offers an explanation for why there seem to be so many dark side users in this Star Wars universe, where the Sith are only supposed to number two. She tells Jacen how there were many candidates, like herself, who failed to become Sith. I have a lot of trouble believing that any of those potential candidates could fail and live, based on what we know of the Sith.

She indicates that we don't know the Sith at all, and gives an example, which could be made up for Jacen's benefit, of a wealthy man who mastered the Sith teachings but didn't become corrupted by it. Lumiya's failure apparently is due to the fact that she lost so much of her body to Luke's lasers in the comics. Vader apparently didn't master the Sith ways fully, either, because he lost so much to his encounter with Obi-Wan in Revenge of the Sith. All of her arguments are interesting, and Jacen decides that they merit further investigation. I wonder, though, how much he is actually bothered by what he has to do to allow that investigation to follow.

He once again alters Ben's memory of what happened, and he has to kill the fellow Jedi with them, so convinced is he that he can see the future, and he will end up killing Luke if Nelani lives. I'm not sure I like Jacen's ability to look into the future with the Force. It is dangerously close to Paul Atreides' abilities in Dune Messiah , and defeats the purpose of the future always being in motion.

Jacen is trying to fix the future, much as Leto did in God Emperor of Dune. Knowing something about the books that follow, I figured out early on that Luke's "man who doesn't exist" was Jacen, but I figured it was a Jacen who could look back into the past, much as he did in The Joiner King. Actually, I'm glad she isn't.

The author has set up a good story, and has some great character development, but I wasn't too fond of his narrative abilities. He delves way too deep into the details, giving us far too much information about the minutia of It dragged the story nearly to a halt in several places. In his page-long or more description of the station where the conference was being held, we get too much history to really care about, except, perhaps, if we will play a role-playing game.

That sort of information belongs in a Galaxy Guide. On the other hand, the chapters-long narrative of the military movement it wasn't really an attack, more of a show of force that failed against Corellia was riveting, for the most part, so there are types of stories this author is best at.

And when this author is telling the story, we know that Wedge will be part of it! Also, the writer is really funny. It was a lot of fun to see tongue-in-cheek references to everything, from serious to outrageous. The focus on the characters was also really appreciated. Each character felt unique, and had a certain set of values, to which they adhered.

We now get a really good look at what it means to have attachments, and possibly why the Jedi of the Old Republic forbid such things. We know of Anakin Skywalker's fall due to his attachments. But here, Leia picks her husband over the Galactic Alliance, something she would never have done before the Yuuzhan Vong war.

Luke, on the other hand, is very worried about his son Ben, but allows the good of everything else go above his attachment. What will Jacen's attachments cause him to do? So where do we go from here? 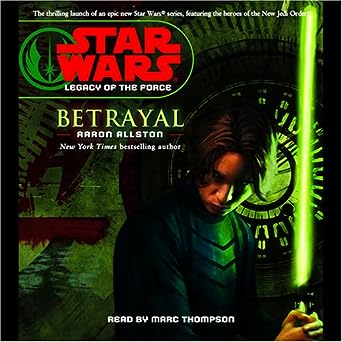 Jacen is the same one here as the one in The Swarm War who believes that Anakin Skywalker was right to want to protect his unborn child from any menace, and at any cost, in the snippets from Revenge of the Sith. We know his path is running towards the Dark Side, but the journey will not, I think, be as straight as it was for Anakin. I also find it amazing at how much more powerful Luke's Jedi are compared to those of the Old Republic.

Buy together and save

Lumiya was right in that respect, that they really did need a fresh start to stop the complacency and arrogance. I wish we would get a sense of what the direction of the Jedi really is. Every series seems to give it a new direction, either to self-reflection, ends-justifies-the-means, or a complete separation of Light and Dark. Jacen is the only one who meddles in all aspects. We'll see if his desire to protect his secret daughter turns him to evil, or if there really is such a thing as a benevolent Sith.

Is the Corellian conflict finished? It doesn't seem like that part of the story was concluded, either. For now, it is interesting enough that I wonder what will happen in future novels.